Here´s a weird situation me an my colleague had to figure out one day.

The issue we noticed was that Video calls peer-to-peer was working fine, but when adding in a third caller, we got a error and the video call stopped working.

So immediatly we thought that the MCU was the source of the problem.
After a PMR regarding the MCU, we actually figured out that the issue was within the VMGR server.

We noticed this in the SystemOut.log, when starting up the VMGR.


After googling up stuff, we came into the track that there´s a lot of .sh and .pl scripts that actually gets fired when launching the VMGR. The scripts are all Polycom related.

The location of the scripts are here:

And the script which we found logical of testing was the "getSystemVersion.sh" script.

When we ran this script manually, we got a output that said "0.0.0". Could this be why the SystemOut.log said "System version is null"?

Ok, we opened up the script and had a look at the content of it:
And we found this:

Then, we had a look at the file it refers to, the "system_version" and it´s content said

So here´s what we did:
We figured that the "getSystemVersion.sh" script just didn´t know where the $PROXIMO_HOME system variable was.
So we typed in this to create the system variable:

Then we did a manual launch of the "getSystemVersion.sh" file again, and now the result was different. The output was:

So, why this system variable had dissapeared from the VMGR server startup sequense, we don´t know.

Here´s what we did to create this system variable every time the VMGR server launches.

We edited the "/etc/init.d/STMediaServer_was.init" startup script, and inserted this: 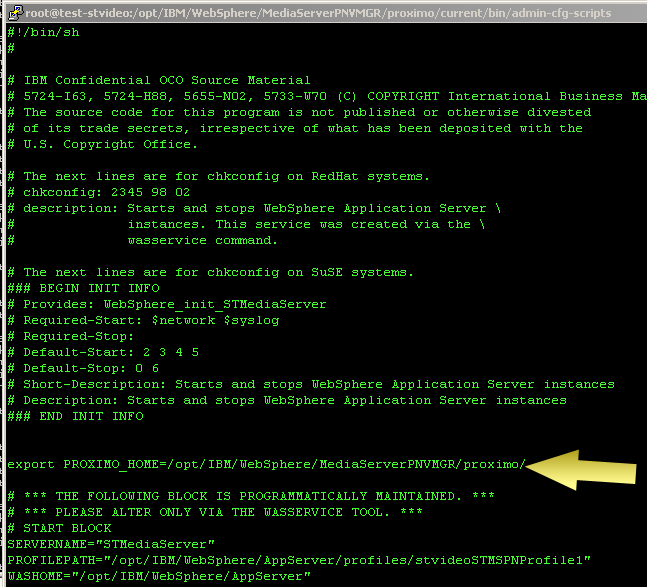 This ensures us that the PROXIMO_HOME system variable is there each and every time the VMGR server launches.

EDIT:
A better approach is to set this export command into the "/etc/profile" file.
I put mine at the bottom of the file.

Then we restarted the VMGR, and the SystemOut.log error message was gone + we were able to have more than 2 people in a video call!!